September 8th -October 9th, 2011
Three photographs of mine are included in CLUB 57 & Friends, an exhibit focusing on many of the pioneers of the early 1980's East Village visual and performing art scene.

CLUB 57 (57 St.Mark's Place) was one of the first truly avant-garde night clubs and performance spaces in the East Village. From 1979 through 1983, Club 57 played host for countless venues and was the source of immeasurable of creative experimentation. With a slight punk and alternative edge, the club provided a forum that encouraged artists to push the creative boundaries through all possible forms and mediums. Themed events that included such standards as art exhibitions and poetry reading were trumped by elaborated staged productions of the Grand Ole Opry, Elvis nights, Monster Movie night and a Putt-putt reggae miniature golf course, complete with refrigerator boxes to resemble a shanty town. For many years Club 57 was by managed by Ann Magnuson.
This exhibition also focuses on what was happening with street and graffiti art in the East Village during this same period. On display will be numerous figurative "shadow" paintings by Richard Hambelton who many consider the dean of late 70's- early 80's street art. Featured along side these works will be photographs, collages, paintings & drawings by many of the pioneers of East Village art scene, displayed alongside Club 57 alumni.  Included in the exhibition are the following esteemed artists: Futura 2000, Keith Haring, Rene Ricard, Julius Klein, Robert Carrithers, Clayton Patterson, Robert Hawkins, Mark Sink, Martha Cooper, Hank O'Neil, Edward Brezinski, Parker Dulany, Rodney Alan Greenblatt, Harvey Wang 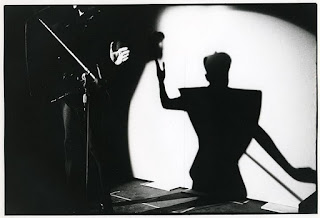